Leopard got heavy to attack the langurs, see in the video how the hunter was taught a lesson 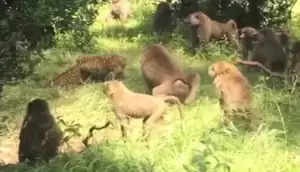 ajab gajab jaipur desk !!!
The leopard may attack any animal and make it its prey, but sometimes in front of the courage of some animals, its condition worsens and it has to leave the field to save its life. We found one such video on social media. In which a leopard made the mistake of attacking a herd of langurs. Because as soon as the leopard attacked the langurs, the whole herd of langurs gathered and surrounded the leopard.