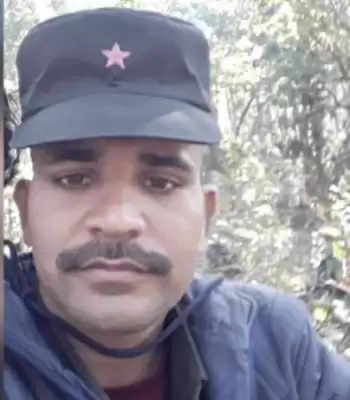 The government had declared a reward of Rs 25 lakh on him.

Yadav, a resident of Bashutta village in Jharkhand's Chatra district, till recently was active in Buddha Pahad, a stronghold of the Maoists.

Although there has been no official announcement of his surrender from the police, reliable sources said that he is being interrogated at an unknown location.

Yadav has been a member of the regional committee of the Maoists, and was involved in most of the Maoist attacks in Jharkhand's Palamu, Latehar, Chatra, and Garhwa and Bihar's Aurangabad, Gaya districts, among others in the last decade.

More than 60 cases are registered against him in different police stations of the states.

In January 2019, the police had seized 18.5 acres of land in Palamu's Redma and 12.78 acres in Chatra's Pratappur belonging to Yadav.

In June 2016, 10 security personnel were killed in a major attack led by Yadav on the Aurangabad-Gaya border in Bihar.

He is the main accused in the 2013 attack on security forces in Latehar's Katia, in which 17 personnels were martyred.

In 2011, eight were martyred in the attack on the convoy of Chatra's then MP Inder Singh Namdhari and in January 2012, 13 personnels, including the station in-charge, were killed in the attack in Bhandaria, Garhwa.

Yadav was involved in all these attacks.