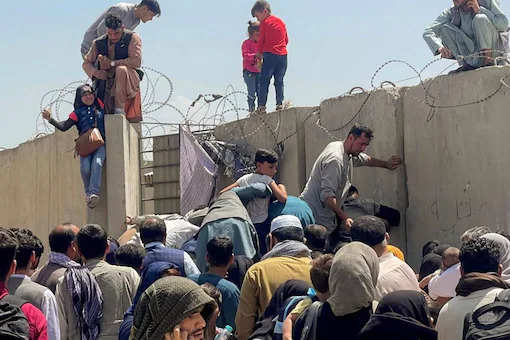 ATaliban spokesman has pledged to secure Afghanistan after the insurgents took over the country following a blitz that lasted over a week. Zabihullah Mujahid made the comment Tuesday at his first news conference.For years, he had been a shadowy figure issuing statements on behalf of the militants. He said the insurgents sought no revenge and that everyone is forgiven.Many Afghans have expressed fear that the Taliban will return the country the brutal rule they used when last in charge, and foreign officials have said they will wait to see if the insurgents make good on their promises.

“The situation in Kabul city will soon be back to normal," was their big statement as fears over stability grew in the war-torn country.“We don’t want to repeat any conflict, any war again, and we want to do away with the factors for conflict," he said through a translator. “Animosities have come to an end, and we would like to live peacefully. We don’t want any internal enemies and any external enemies."He said a new government would be formalised as soon as the unstable conditions in Kabul permitted.Violence: “Damage to people and families occurred during the war was accidental and not intentional. It occurred in an uncontrolled situation. If it happened, it is unfortunate."

Govt officials: “No one will go to anyone’s house and people should be sure that the Taliban have pardoned everyone, whether they were in the regime or those who worked with American forces. No one will search their house."Women: “Right of women will be under the Shariya law. There will be no discrimination against women but they have to live under the framework of Sharia law. We need women in various fields [in the new government]. We will allow them to work within the framework of Islam."Media: “The media should be neutral, Islamic values should be taken into consideration and the media should broadcast on the basis of national values. We do not allow broadcasts against national interests and values. No broadcast should contradict Islamic values, they should be impartial, no one should broadcast anything that goes against our national interests.

Foreign embassies: Securities of embassies are very crucial for us. We will not allow anyone to harm your securities (Embassies).Many Afghans have expressed fear that the Taliban will return the country the brutal rule they used when last in charge, and foreign officials have said they will wait to see if the insurgents make good on their promises.Earlier in the day, a top Taliban official met with a Qatari official before reportedly leaving the country for Afghanistan. Mullah Abdul Ghani Baradar met with Qatar’s Foreign Minister Sheikh Mohammed bin Abdulrahman Al Thani on Tuesday.A statement said the two reviewed the latest security and political developments in Afghanistan, stressing the need for the protection of civilians, intensifying necessary efforts to achieve national reconciliation, working for a comprehensive political settlement, and a peaceful transfer of power.