Waugh, Johnson, Finch to be Clarke's replacements in commentary for Australia tour of India: Report

New Delhi, Jan 26 (IANS) Mark Waugh, Mitchell Johnson and Aaron Finch will be the replacements for Michael Clarke for commentary during Australia's upcoming tour of India. 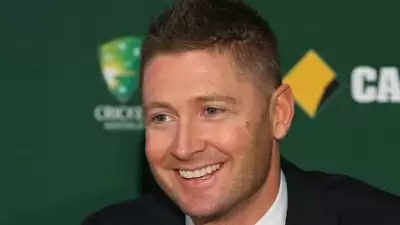 New Delhi, Jan 26 (IANS) Mark Waugh, Mitchell Johnson and Aaron Finch will be the replacements for Michael Clarke for commentary during Australia's upcoming tour of India.

A report in The Sydney Morning Herald says Clarke, the 2015 ODI World Cup winning captain of Australia, was passed over by the BCCI following a video of his altercation with his girlfriend going viral on social media.

The report adds that Waugh is set to accompany Matthew Hayden as the Australian commentators for the first two Tests of the series, to be played for the Border-Gavaskar Trophy, in Nagpur (February 9-13) and New Delhi (February 17-21).

Johnson will then take over from Waugh for the third and fourth Tests of the series in Dharamshala (March 1-5) and Ahmedabad (March 9-13). For the three ODIs that follow after the four-match Test series, Johnson will be joined by Finch, who recently retired from ODIs.

The report also says that the short-notice nature of the assignment and its short turnaround to the 2023 season of the Indian Premier League (IPL) contributed to numerous names being unable to take part. The likes of Ricky Ponting, Mike Hussey, Simon Katich, Brad Haddin and Trevor Bayliss are all involved in the IPL as head coaches of various teams or in other coaching capacities.

Having lost the opportunity to commentate on the tour of India, Clarke had earlier said he was approached by the upcoming season of the Pakistan Super League (PSL), which ends on March 22, to be a commentator for them.

The report also said the touring Australia Test side, who are scheduled to depart for India on Tuesday, which is January 31, are set to spend five days in Bengaluru in training before the first Test in Nagpur. It added that Bengaluru has been deemed to provide the most suitable practice options for the visiting Australians ahead of the four-match series.

"We are really confident and comfortable with the preparations the BCCI has made for us. The proof will be in the pudding obviously, but we're really comfortable with the discussions we've had. They see merit in seeing us prepare really well for a marquee Test series as we do when overseas teams come out here," Peter Roach, Cricket Australia's head of cricket operations, was quoted as saying in the report.

The series against Australia is of extreme importance for India, as a spot in the final of the World Test Championship (WTC), to be held in June 2023, is at stake.