New Delhi, Nov 25 (IANS) With only a few days remaining before the start of the series, England are facing some anxious moments over the fitness of fast bowler Mark Wood ahead of the first Test against Pakistan on December 1. 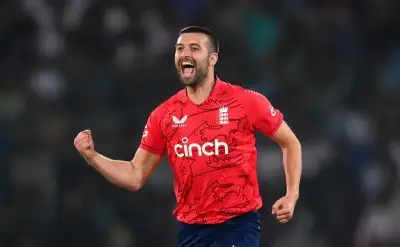 New Delhi, Nov 25 (IANS) With only a few days remaining before the start of the series, England are facing some anxious moments over the fitness of fast bowler Mark Wood ahead of the first Test against Pakistan on December 1.

Wood, who is at home recovering from a hip injury suffered during the ICC T20 World Cup, looks doubtful to play the first Test in Rawalpindi, starting next Thursday.

Though Wood, who had missed the later part of the T20 World Cup including the semifinal against India, is "coming on nicely" -- as Stokes said -- has not bowled sufficiently, despite recovering from the injury, in preparation. Along with Wood, Harry Brook, who has been given a break after consecutive tours of Pakistan and Australia.

Wood and Brook will have three days to prepare after flying to Pakistan on Saturday but it is felt that would not be sufficient to go into the first Test, according to reports in the English media.

Woods had returned to international action in Pakistan during the T20I series after missing the 2022 summer series. He was one of the stars of the England side because of his express pace.

Stokes said the team is coming up well.

"It's all about peaking at the right time and the message at the start of the camp was to build up towards two days before that Test and still have something left in the tank to get going because you don't want to burn yourself out now and almost be ready a week too early," Stokes was quoted as saying by the Telegraph newspaper.

"I looked at this fixture here in particular and honestly thought I'd get more out of these three days of training. Getting my bowling workload back up again after having a break after the World Cup in particular. I like working on my skills in the nets rather than being out there in the middle.

"I've really benefited from these three days definitely and just because I've missed this game I don't feel like I've missed a trick or feel underprepared. We've still got three days out in Pakistan to prepare for the first Test

"We're a group where we like to give the individuals what they want to do rather than forcing them into doing something, but letting them take care of themselves because they all know what they need to be ready for that first Test," he said.

England are touring Pakistan for Test matches for the first time in 17 years and will play three Tests at Rawalpindi (Dec 1-5), Multan (Dec 9-13) and Karachi (Dec 17-21).