Madrid, Jan 22 (IANS) Real Sociedad moved level on points with Real Madrid in La Liga, although with two extra games played, after a 2-0 win away to Rayo Vallecano. 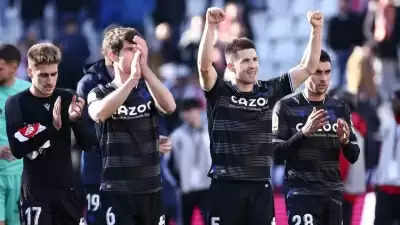 Madrid, Jan 22 (IANS) Real Sociedad moved level on points with Real Madrid in La Liga, although with two extra games played, after a 2-0 win away to Rayo Vallecano.

The side from San Sebastian assured the points in an impressive first half, thanks to a 15th-minute strike from Alexander Sorloth and a second goal 21 minutes later from young winger Ander Barrenetxea, reports Xinhua news agency.

They were then able to effectively control the match after the break, extending their winning run to nine games in all competitions, ahead of next week's Copa del Rey quarterfinal away to FC Barcelona.

Atletico Madrid started with new signing Memphis Depay on the subs' bench for their game against Valladolid, but the Dutch international was hardly needed as they raced into a 3-0 lead against a rival that has lost their last five games.

Alvaro Morata opened the scoring in the 17th minute, with Antoine Griezmann adding a second five minutes later and Mario Hermoso making it 3-0 in the 27th minute.

In the second half, Atletico conserved their energy and maintain their lead ahead of next week's Copa del Rey tie against Real Madrid.

Martin Braithwaite's 42nd-minute goal gave Espanyol their second league win in two matches to lift them clear of the bottom three while ending a poor week for Betis, who were knocked out of the Copa del Rey on penalties by Osasuna earlier in the week.

Finally, Ivan Rakitic netted an 88th-minute penalty to give Sevilla a nerve-wracking 1-0 win at home to Cadiz. Sevilla coach Jorge Sampaoli was sent off in the second half as nerves got the better of him, but the win lifts Sevilla out of the bottom three while leaving Cadiz penultimate in the table.

The round of matches began on Friday with Dani Rodriguez's precise second-half shot giving Mallorca a 1-0 win at home to Celta Vigo, who remain in the battle to avoid relegation.