IND v NZ, 1st ODI: One of the most special ODI knocks I have seen, says Williamson on Latham's 145 not out

Auckland, Nov 25 (IANS) New Zealand skipper Kane Williamson expressed that he was in absolute awe of seeing wicketkeeper-batter Tom Latham dominate Indias inexperienced bowling attack with his career-best score of 145 not out, calling the innings "one of the most special ODI knocks he has ever seen." 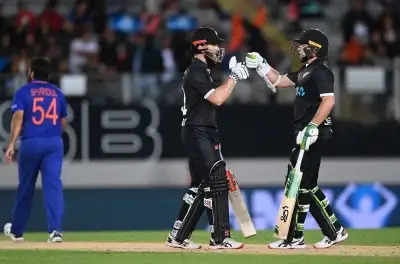 Auckland, Nov 25 (IANS) New Zealand skipper Kane Williamson expressed that he was in absolute awe of seeing wicketkeeper-batter Tom Latham dominate Indias inexperienced bowling attack with his career-best score of 145 not out, calling the innings "one of the most special ODI knocks he has ever seen."

In chasing 307 at Eden Park, New Zealand were in trouble at 88/3 in 19.5 overs. But Latham, the left-handed batter, took the game away from India, hitting an inexperienced bowling attack all over the park to end up unbeaten on a career-best score of 145 off 104 balls, laced with 19 fours and five sixes.

But it was his 25-run onslaught on Shardul Thakur in the 40th over, where one six and four boundaries were hit, apart from reaching the three-figure mark, which firmly tilted the match in New Zealand's favour.

"Incredible innings from Tom Latham. Absolutely on fire. We were talking in the middle about getting through this over and that over. And then he just flicked a switch. It was one of the most special ODI knocks I have seen and it was nice to be at the other end to watch him," said Williamson in the post-match presentation ceremony.

Latham also stitched an unbeaten 221-run stand off 165 balls with skipper Williamson, who was the perfect ally and was unconquered at 94 not out to chase down the total with seven wickets and 17 balls remaining.

"It was an over or two where he flicked a switch. We got that big over (the 40th over) and he just kept going. There were moments when we put them under pressure. Nice to make a contribution, and with Tommy going the way he was, it was about complementing. Just super special to be at the other end and see it," added Williamson.

With the ball, Tim Southee and Lockie Ferguson took three wickets each while Adam Milne had a scalp to his name as India made a daunting 306/7 in the first innings. "At the halfway stage, it was a competitive total. The wicket was starting to turn a bit. And the cross-seamers got a bit out of it. But if you build partnerships here at Eden Park, you can chase anything."

"On these drop-in pitches, you bowl full and straight, and it can be difficult. You are always in the game with the dimensions. Spin played a big role today. It was a very good wicket. The seamers did an excellent job," stated Williamson.

Latham, who hit his second ODI century against India and took home the Player of the Match award, felt that Friday's match was a day where everything went right for him though Washington Sundar's off-spin challenged him a bit.

"Just one of those days when everything comes off. Having a bit of fun in the end. Just reacted to things and it paid off. It was nice to put the ball in the gaps and run hard. I guess the preparation has been nice."

"It's been nice and was able to hit the ball right today. Washington Sundar was getting a bit of turn and was hard to play against him. Small ground, so you can capitalise in the end. Nice partnership with Kane, who played beautifully."