Auckland, Nov 25 (IANS) Tom Latham reiterated on Friday why he's a dependable middle-order batter for New Zealand by striking his seventh ODI hundred to seal a seven-wicket victory over India in the series opener at Eden Park on Friday. 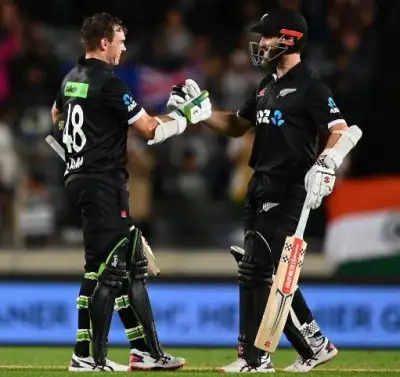 Auckland, Nov 25 (IANS) Tom Latham reiterated on Friday why he's a dependable middle-order batter for New Zealand by striking his seventh ODI hundred to seal a seven-wicket victory over India in the series opener at Eden Park on Friday.

After Shreyas Iyer top-scored with 80 off 76 balls while captain Shikhar Dhawan and Shubman Gill struck 72 and 50 respectively in their fourth hundred-plus stand as an opening pair this year to propel India to a challenging 306/7, New Zealand were in trouble at 88/3 in 19.5 overs.

But Latham took the game away from India, hitting an inexperienced bowling attack all over the park to end up unbeaten on a career-best score of 145 off 104 balls, laced with 19 fours and five sixes.

He also stitched an unbeaten 221-run stand off 165 balls with skipper Kane Williamson, who was the perfect ally and was unconquered at 94 not out to chase the total with 17 balls remaining. For India, they lost the plot with the ball when Latham and Williamson were attacking them, especially after the 40th over.

Umran Malik did trouble the Blackcaps with his two wickets on ODI debut while Washington Sundar, after a blazing cameo of 37 not out off 16 balls, was economical in his spell of 0/42. Rest of the bowlers, including debutant left-arm pacer Arshdeep Singh, were hammered for runs.

Chasing 307, Finn Allen and Devon Conway hit five boundaries in the first five overs. Allen was dropped by Yuzvendra Chahal at short mid-wicket off Shardul Thakur. But on the third ball of the eighth over, the pacer extracted the outer edge off Allen's bat to have him caught behind.

Post power-play, Conway went for a booming drive, but got a faint edge behind to keeper to become Malik's maiden ODI scalp. Four overs later, Malik had another scalp to his name when Daryl Mitchell miscued a slice to deep point.

From 88/3 in 19.5 overs, Williamson and Latham joined forces to get New Zealand's chase back on track. The duo took to rotating strike before Latham began by sweeping Yuzvendra Chahal, before cutting Malik twice through the off-side to get three fours in two overs.

Williamson and Latham tore into an economical Sundar - the former launching a six over long-on while the latter got a four by sweeping through backward square leg. After Latham bisected the field with a perfect sweep off Chahal for four, Williamson got his fifty off 54 balls by pulling Thakur through square leg for a boundary.

Post that, the duo shifted their gears by latching onto anything which was short, had some width outside the off-stump or down leg, resulting in Latham raising his fifty.

India were put under real pressure as Latham brought out effortless flicks, pick-up shots and pulls to go past Williamson in scoring while running between the wickets very well.

Latham then tore into Thakur in the 40th over - pulling over deep backward square leg for six, followed by four successive boundaries, three of which were hammered through the leg-side. He would then complete his second ODI century against India with a single to long-on to take 25 runs off the over.

The result was a foregone conclusion from there as Latham and Williamson hit nine boundaries from 42.2 to 47.1 overs, last of which was steered nicely by the New Zealand skipper past third man off Arshdeep to give the hosts' a 1-0 lead in the three-match series.