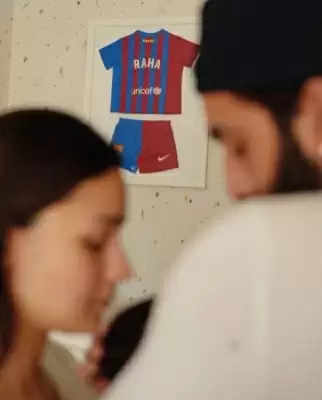 The Spanish giants, one of the most prominent football clubs in the world, took to social media to communicate their feelings to the couple and the whole world. The couple had on Thursday announced that their

"Congratulations, @aliaa08 & Ranbir Kapoor!! A new Barca fan is born. We can't wait to meet you all in Barcelona," FC Barcelona tweeted via its official handle, @FCBarcelona.

The tweet was accompanied by a photograph that Alia Bhatt had put out on her Instagram handle, with the couple in the foreground holding the baby with a picture of a small jersey and shorts, in the famous Barcelona's official maroon and blue colours, adorning the wall.

With the name "Raha" written on the jersey, Alia and Ranbir also announced the name of their daughter. Alia, in her post, said the name Raha means "divine path" and was suggested by her mother-in-law Nitu Kapoor.

She added, "And true to her name, from the first moment we held her - we felt it ALL! Thank you Raha, for bringing our family to life, it feels as though our lives have only just begun."

Ranbir is a known Barca fan, having many times expressed his admiration and support for the Spanish giants. He has tweeted his photos in Barcelona attire on many occasions.

Alia Bhatt, who was earlier known to be an Arsenal fan, seems to have converted to Barcelona.