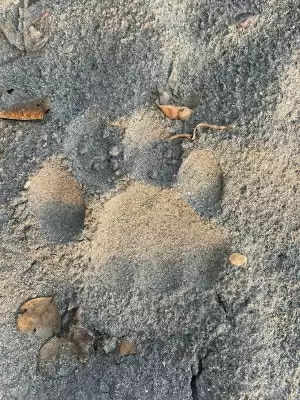 Records say tigers and elephants are the sporadic visitors to the Simbalbara National Park in the Paonta Valley in Himachal Pradesh's Sirmaur district that lies in the Shivalik hills, adjacent to Haryana's Kalesar National Park.

According to the Zoological Survey of India (ZSI), the Simbalbara National Park is the only conservation area in Himachal Pradesh where the occurrence of tiger and elephant has been reported.

In a faunal survey by the ZSI in 2005 and 2006, tiger pugmarks and scats were observed in two instances. One scat sample collected was composed of pure soil with abundant undigested ants, while another scat sample composed of digested bones in the form of powdery calcareous substance along with undigested hairs.

Although Simbalbara supports a good prey base for large carnivores, its smaller size is not suitable for a tiger to reside permanently, says the ZSI.

In November last, a herd of elephants was spotted in Simbalbara National Park, which is now renamed as Sher Jung National Park.

On the habitat of the elephants, the ZSI says since grass is the major food item for elephants, the smaller size and deciduous vegetation of Simbalbara, without much grassland, cannot sustain an elephant herd for a longer period. Hence the park is not an attractive habitat for the elephant.

On the spotting of the last week's pugmark, Divisional Forest Officer (Wildlife) N. Ravisankar told IANS on Tuesday that the pugmark of the fully grown tiger was spotted on the periphery of the Simbalbara National Park.

"We have installed camera traps in the area to monitor its movements," he said.

"Since the pugmark was recorded on the periphery of the national park, we have sensitised locals to avoid man-animal encounters. But we have noticed some faded pugmark in that area that indicated that the predator might have returned to the forest," he said.

On the tiger's presence in Simbalbara, Ravisankar said the water flow in the Yamuna river is minimized during winter and there "is possibility that it reached up to Simbalbara from the Rajaji National Park in neighbouring Uttarakhand".

Upbeat over the spotting of tiger's pugmark, wildlife experts say this is good to know that a tiger is able to reach up to Simbalbara. They say the contiguity of Rajaji- Kalesar-Simbalbara makes the landscape extremely important and worth protecting.

Simbalbara, originally the hunting ground for the Maharaja of Sirmaur, is home to the sambhar, spotted deer (cheetal), barking deer, wild boar, the blue bull and many other prey mammals.

The park shares a boundary with the Darpur, Majra and Nagli reserve forests with seasonal and perennial streams.

Speaking about the movement of tigers, a wildlife expert told IANS the Simbalbara and Kalesar national parks are connected, but not Rajaji.

The nearest place which has a tiger population is western part of the Rajaji reserve. The western part is crowded with human habitations with crisscrossing of road and rail networks.

And the chances of a tiger sauntering from Rajaji to Simbalbara, covering habitations are largely impossible, he says.

The spotting of tiger pugmarks in Himachal Pradesh assumes significance as there are plans by the National Tiger Conservation Authority for reintroducing tigers in the western part of Rajaji from the eastern landscape.

The Simbalbara National Park, located along the Nahan-Ponta Sahib road, is some six km from Puruwala. Ponta Sahib is about 18 km from the national park that has been named after Sher Jung, a freedom fighter and hunter-turned-conservationist.

(Vishal Gulati can be contacted at vishal.g@ians.in)