This R-Day, commoners not VIPs figured in special invitees list 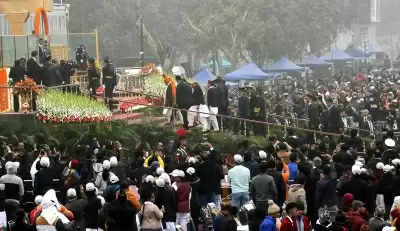 The special or Shram Yogi guests were made to sit in the front row at Kartavya Path.

According to the Defence Ministry, invitations were sent to common people of all sections of society, such as Shram Yogis involved in the construction of Central Vista, Duty Path, New Parliament House, milk, vegetable vendors, street vendors etc. . These special invitees who reached the Republic Day celebrations were made to sit prominently on the duty path.

Two hundred students who came to participate in the 'Pariksha Pe Charcha' programme with the Prime Minister were also made guests of the celebrations. These students will also visit Raj Ghat, PM Museum and other monuments.

Many unique activities were organised in the Republic Day celebrations this year. These activities include Military Tattoo and Tribal Dance Festival. As part of the Republic Day celebrations, a Military Tattoo and Tribal Dance was organised at Jawaharlal Nehru Stadium, here on January 23 and 24 to mark the 126th birth anniversary of Netaji Subhash Chandra Bose The festival 'Adi-Shaurya - Parva Parakram Ka' was held.

More than 300 schools participated in the competition organised by the Ministry of Defence in coordination with the Ministry of Education. Eight school bands were selected, which performed at the National War Memorial from January 15 to 22, 2023. Prince Academy of Higher Education, Sikar, Rajasthan was declared the winner in both girls and boys brass band categories.