Surat (Gujarat), Jan 24 (IANS) In a shocking rerun of the Delhi car-drag case, a body was found almost 12 km away from the accident site in Palsana taluka of Surat district, police said on Tuesday. 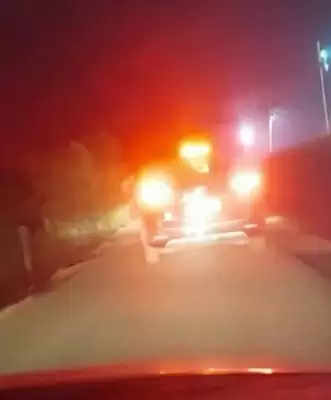 Surat (Gujarat), Jan 24 (IANS) In a shocking rerun of the Delhi car-drag case, a body was found almost 12 km away from the accident site in Palsana taluka of Surat district, police said on Tuesday.

The accident happened on January 18 when a car hit a couple who were on a two-wheeler. It was only after a video of the speeding car involved in the accident surfaced that the culprits could be identified.

The samaritan, who had followed and recorded the speeding car, shared the video clip with the Surat rural police.

District Superintendent of Police Hitesh Joysar told media persons, "A citizen had shared the video of the suspected car on my WhatsApp. We were able to identify the car and locate the accused's residence. Right now the accused driver has gone underground, but we will arrest him soon."

On January 18 a hit-and-run case was reported from the Palsana taluka falling under Kadodara Police station. Injured Ashwini Patil was rushed to the Surat government hospital for treatment. Next day when she gained consciousness, she was informed that her husband, Sagar's body was found some 12 km away from the accident site.

The car, which had hit them, had dragged Sagar's body.

According to the police, the citizen wished anonymity. The police said, "He noticed that a person fell from a car in front. So he followed the car, recorded the video on mobile. As the front car was speeding up, he orally recorded the car's registration number. Initially he did not gather courage to share the information with the police, but after reading the news in the media, he decided to share the video footage."

In a horrific incident, Anjali Singh, 20, was killed in the early hours of New Year after her scooty was hit by a car which dragged her for 10-12 km from Sultanpuri to Kanjhawala in Delhi.