Shimla, Nov 24 (IANS) Sensing a neck-and-neck contest between Himachal Pradesh's ruling BJP and the Congress ahead of the assembly election results to be declared on December 8, rebels, who had broken ties with the mainstream parties, have started holding 'in-door' parleys with a belief that in politics, there is no permanent enemy or friend. 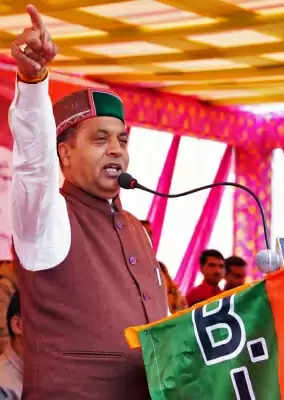 The BJP and the main Opposition Congress have begun an exercise to keep its numbers in 'order' in case of hung House.

Insiders told IANS leaders of both parties are trying to sink their differences with party rebels, whose numbers are nearly 20, to improve the party's prospects.

The fear of exodus of lawmakers from the Congress is high.

"If the BJP realises it would find it difficult to get enough numbers to save its government, it can lure our MLAs with huge sums of money," admitted a senior Congress leader, who didn't wish to be identified.

At the same time, he admitted that there is no harm in holding parleys with the rebels. "After all they are the Congress men."

The problem by rebels seems more serious in the BJP as the party denied ticket to 11 sitting legislators, shifting seats of two ministers, denying nomination to one minister, whose son was fielded from that constituency, and swapping seats of two veterans owing to infighting.

BJP's rebels, mainly from Kangra and Kullu districts, have started holding parleys to project a united face once the results are out.

A meeting of BJP rebels, Kirpal Singh Parmar, Manohar Dhiman and Sanjay Prashar, who fought the elections as an Independent in Kangra, state's largest district, was held recently to chalk out a strategy to bring all the like-minded rebels together.

It is learnt that they are holding discussions separately on election prospects with rebels even of the Congress to form a pressure group. For this, they contacted former Congress MLA Jagjivan Pal, who had also contested the elections as an Independent candidate after the party denied him the ticket.

A senior BJP leader told IANS the doors of the party are open for rebels.

In Mandi, the home district of Chief Minister Jairam Thakur, and Kullu districts, the prominent rebels include Abhishek Thakur, son of six-time legislator Roop Singh, from Sundernagar; Gyan Chauhan from Nachan; and Hiteshwar Singh, the son of Maheshwar Singh, from Banjar. They contested as an Independent candidate.

The Congress, too, is not lagging in infighting.

Upset over the denial of a ticket, seven-time lawmaker Gangu Ram Musafir contested as an Independent from his once pocket borough Pachhad in Sirmaur district.

However, after 18 days of the helm, Dhawala returned to the saffron party and the Congress lost its majority in the assembly of 68 seats.

After this, the BJP formed a coalition government in post-election alliance with the Himachal Vikas Congress (HVC), an outfit floated by Congress rebel and former communications minister Sukh Ram.

In that election, the HVC had managed to win five seats.

Political observers say there are chances of a 1998 repeat this time too. So both political parties are not taking any chance by banking on their old warhorses to regain their lost political ground.

(Vishal Gulati can be contacted at vishal.g@ians.in)