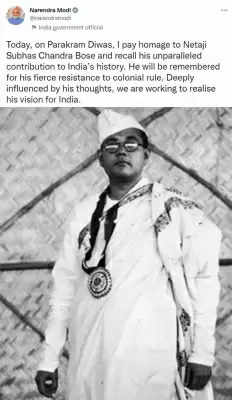 "Today, on Parakram Diwas, I pay homage to Netaji Subhas Chandra Bose and recall his unparalleled contribution to India's history. He will be remembered for his fierce resistance to colonial rule. Deeply influenced by his thoughts, we are working to realise his vision for India," Modi tweeted.

Later in the day, PM Modi will also participate in a ceremony to name 21 largest unnamed islands of Andaman & Nicobar Islands after 21 Param Vir Chakra awardees via video conferencing.

During the programme, PM Modi will also unveil the model of the national memorial dedicated to Netaji, which is to be built on Netaji Subhas Chandra Bose Dweep.