Bhubaneswar, Nov 25 (IANS) The second day of the Winter Session of Odisha assembly on Friday witnessed pandemonium as the opposition -- BJP and Congress -- engaged in a verbal duel with the ruling BJD over farmers' issues. 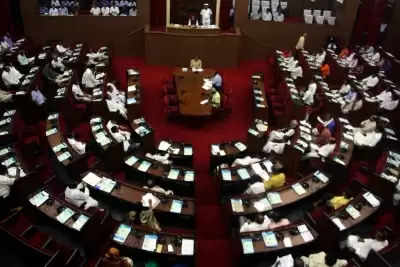 Bhubaneswar, Nov 25 (IANS) The second day of the Winter Session of Odisha assembly on Friday witnessed pandemonium as the opposition -- BJP and Congress -- engaged in a verbal duel with the ruling BJD over farmers' issues.

As soon as the House assembled for the day's proceedings at 10.30 a.m., both the opposition and ruling party members rushed to the Well of the Assembly raising slogans against each other over various demands of the farmers.

The opposition Bharatiya Janata Party (BJP) members were demanding disbursement of input subsidy to the farmers and irregularities in paddy procurement.

The Biju Janata Dal (BJD) members too rushed to the well of the House demanding enhancement of paddy MSP to Rs 2,930 per quintal as suggested by the assembly.

The Congress members blamed both the BJP and BJD for not paying any attention to the farmers' demands.

As a noisy scene prevailed in the Assembly, Speaker B.K. Arukha first adjourned the proceedings till 11.30 a.m., and then till 4 p.m.

However, ruckus continued in the House in the afternoon session also as opposition BJP and Congress members raised slogans against each other in the well of the House.

After adjourning the businesses till 4.30 p.m., the Speaker called for an all-party meeting. However, the situation remained the same. Finally, the proceedings were adjourned till Saturday morning.

When the House remained adjourned, the members of the ruling Biju Janata Dal (BJD) staged a dharna near the statue of Mahatma Gandhi on the Assembly premises demanding the rise of MSP on paddy by the Central government.

The treasury bench members including Ministers later marched to Raj Bhavan and submitted a memorandum to the Governor demanding Rs 2,930 per quintal MSP on paddy.

Holding banners and posters, the BJP members also staged a protest in the Assembly premises demanding input subsidy for drought affected farmers and disbursement of crop insurance to the farmers.

"The farmers of the state especially western Odisha are waiting to get input subsidy for the crop loss due to drought situation. Due to the unholy nexus between the millers and government officials, a scam of Rs 3,000 crore happening every year in the procurement of paddy," alleged BJP chief whip Mohan Majhi.

Congress MLA Santosh Singh Saluja said both state government and Centre are responsible for delay in disbursement of crop insurance claims to the drought-hit farmers.

Instead of taking the responsibility to smoothly run the House, the ruling party went to the well of the House and disrupted the proceedings, he said.