Mizoram: Officials in a fix to accommodate seized animals smuggled from Myanmar

Aizawl, Nov 25 (IANS) Wildlife and forest officials of Mizoram are struggling to accommodate the large number of exotic animals which were seized by various security forces after being smuggled in from Myanmar. 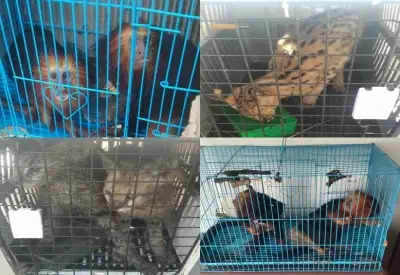 Aizawl, Nov 25 (IANS) Wildlife and forest officials of Mizoram are struggling to accommodate the large number of exotic animals which were seized by various security forces after being smuggled in from Myanmar.

Forest officials said that over 400 exotic animals, including endangered species, smuggled in from southeast Asian countries have been seized by the Assam Rifles, Mizoram police and different other law enforcement agencies in Mizoram during the past many months.

Aizawl zoological garden officials said that proper and scientific accommodation and care of the seized animals in the zoo caused serious problems due to the shortage of space, suitable enclosures and trained manpower.

The department, amid the space problems, also constructed many new enclosures for the seized animals, but trained manpower is also another big problem for taking care of these animals.

According to the officials, following the court orders, around 320 animals were sent to the Aizawl Zoological Garden and over 300 of them survived so far and were kept in vacant enclosures as well as newly-constructed enclosures.

Many of the reptiles died in the zoo while some of them were brought dead.

The officials are now trying to make arrangements to accommodate around 50 seized baby crocodiles.

The wildlife experts said that after the recovery of the large number of smuggled animals, they, as per the guidelines of the Central Zoo Authority, must be kept in proper quarantine with proper diet and care, but in most cases this is not done.

The Youth for Environment Justice Mizoram (YEJM), led by its convener Vanramchhuangi, recently met Mizoram Governor Hari Babu Kambhampati and told him that many exotic animals are being smuggled through Mizoram for sale in destinations outside Mizoram.

"After the recovery of the animals, they are being kept temporarily at makeshift rescue centres and other enclosures set up at the zoo. The animals are being poorly looked after and poorly fed," Vanramchhuangi told the Governor.

For a temporary solution, the YEJM proposed the construction of holding facilities for the animals in Aizawl and Champhai, bordering Myanmar.

The Governor shared his appreciation that the youth of Mizoram are now showing concern for activities that are directly or indirectly affecting the environment of Mizoram.