Learning to ride cycle gives confidence, so I made 'Kurangu Pedal': Kamalakannan

Panaji, Nov 25 (IANS) Confidence that he gained by learning to ride a cycle pushed him to make a movie 'Kurangu Pedal', said Tamil director Kamalakannan. 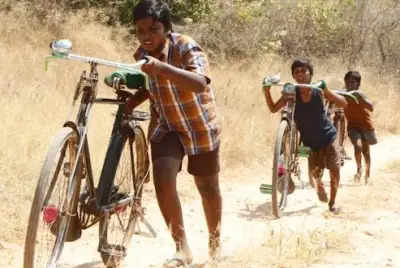 Panaji, Nov 25 (IANS) Confidence that he gained by learning to ride a cycle pushed him to make a movie 'Kurangu Pedal', said Tamil director Kamalakannan.

'Kurangu Pedal' captures a child's interest in learning to ride a bicycle while the father doesn't know how to do it. The movie, set in the 1980s, is about the child protagonist Maariyappan (Maari) and his quest to learn to ride a bicycle. The village sees its first cycle-on-rent shop. Denied money to take a cycle on rent, Maari clandestinely gets money from his pampering mother to rent a cycle to learn cycling and now his cycling sessions are peppered with interesting events and run-ups with strangers.

Director Kamalakannan speaking in 'Table Talk' programme in the International Film Festival of India, underway in Goa, on Friday said that the story kept on lingering in his mind as cycle was the one of the most intriguing things in his childhood. "Learning to ride a cycle gives one confidence, that pushed me to make a movie", he said.

The director, when asked about the competition from high budget movies to his movie, said that it's the storyline, tight screenplay and performances which is important for a movie to reach larger audiences.

Speaking about his experience in the film, actor Kaali Venkat accepted that despite having acted in more than 90 films in Tamil, he learnt a lot from the child artistes who have debuted in this movie.

Story-writer Rasi Alagappan expressed delight that the director has beautifully brought it on to the screen while faithfully capturing the emotions in the story.

The movie, based on Rasi Alagappan's short story 'Cycle', is a contender in 53rd IFFI's Golden Peacock award in the International Competition Category and UNICEF - ICFT Gandhi medal. The music of this visually delightful and nostalgic film has been scored by Ghibran with child artist Santosh playing the lead character "Maari' and actor Kaali Venkat playing the role of 'Kandasamy', his father.