Kolkata, Jan 23 (IANS) In a swift and co-ordinated operation, the Indian Coast Guard evacuated an injured mariner from a tanker anchored off Sagar Island in West Bengal on Monday morning. 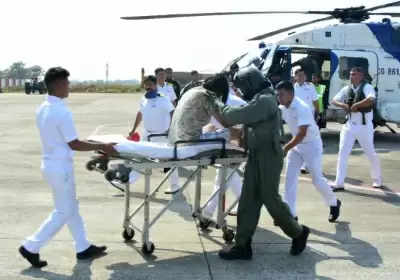 Kolkata, Jan 23 (IANS) In a swift and co-ordinated operation, the Indian Coast Guard evacuated an injured mariner from a tanker anchored off Sagar Island in West Bengal on Monday morning.

The crew member of the Singapore-flag vessel MT GB Venture, identified as Than Htjke Lwin from Myanmar, was flown to Bhubaneswar where he has been admitted to a private hospital. His condition is stated to be stable.

At around 6.30 a.m., the Coast Guard's district headquarters at Haldia received an alert from the Syama Prasad Mookerjee Port, Kolkata's vessel tracking management system (VTMS) located at Sagar about a medical emergency on board the tanker.

The tanker was anchored around 40.5 nautical miles south of Sagar due to machinery failure. Lwin apparently suffered blunt trauma to his abdominal region while tending to a hydraulic pipeline on board.

He complained of severe pain and experienced difficulty in breathing. Realising that Lwin could not be treated on board, the master of the vessel sought assistance from the Coast Guard.

"It was ascertained that the ship was located about 80 nautical miles East North East of Paradip, Odisha. Our medical officer at Haldia immediately contacted the master and advised necessary first-aid to stabilise the patient.

"The ship's local agent was also contacted for a regular update. After realising that a medical evacuation was called for, an ALH Dhruv of the Coast Guard took off from the Force's air enclave at Bhubaneswar and reached the ship at 10.10 am. After checking the weather and sea state, the pilot maneuvered his aircraft and airlifted Lwin. The evacuation was completed by 10.30 am and the ALH landed at Bhubaneswar around 11.40 am where a waiting ambulance rushed the patient to hospital," a senior Coast Guard official said.

He added that two Coast Guard ships in the area were also vectored to the location of the tanker to help out in case an air evacuation became difficult. Over the years, true to its motto 'We Protect', the Indian Coast Guard has saved thousands of lives at sea and carried out hundreds of medical evacuations of ill or injured mariners.