New Delhi, Nov 25 (IANS) The Election Commission (EC) has told the Supreme Court that it cannot act against parties like Indian Union Muslim League (IUML) and All India Majlis-e-Ittehadul Muslimeen (AIMIM) for using the name of a religion -- Muslim -- in the party name since they were registered before 2005. 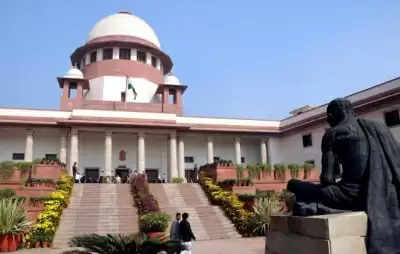 New Delhi, Nov 25 (IANS) The Election Commission (EC) has told the Supreme Court that it cannot act against parties like Indian Union Muslim League (IUML) and All India Majlis-e-Ittehadul Muslimeen (AIMIM) for using the name of a religion -- Muslim -- in the party name since they were registered before 2005.

The EC in 2005 had decided not to register any more parties using religious names or symbols.

The EC, in a written response, said that in 2005, it had taken a policy decision, whereby it was decided that political parties having religious name/connotation would not be registered thereon under Section 29A of the Representation of People's (RP) Act, 1951.

"As per the said policy decision taken in 2005, the Election Commission of India since then has not registered any political party having religious connotation in their name under the provision of Section 29A of the RP Act, 1951. It is apposite to mention herein that certain political parties (IUML and AIMIM) mentioned in the instant Writ Petition were registered prior to the aforesaid decision of the EC," it added.

The Supreme Court had sought the view of the EC on a petition which contended that use of names and symbols related to religion is a violation of Representation of People's Act (RPA).

The plea submitted that using religion to lure voters is strictly prohibited under section 123 of RPA citing the secular values of the Constitution.

Rizwi was represented in the Supreme Court by senior advocate Gaurav Bhatia.

The EC said it did not have power to de-register a party and left the decision in this regard to the Supreme Court.

The affidavit added that even in May 2014, EC issued an order whereby it was decided that parties seeking registration should not have religious connotations.

"The registered names of those existing political parties which are having religious connotations have become legacy names as they have been existing for decades. Whether the names of these political parties may or may not be disturbed is accordingly left open to the wisdom of this court (SC)," said the EC's affidavit.

It further added that the prayer of the petitioner to cancel the symbol allotted to political parties with religious connotation is legally untenable as symbols reserved for any recognised national or state party is strictly based on its electoral performance.

On September 5, the Supreme Court on Monday issued notice on Rizwi's plea seeking a direction to the EC to cancel the symbol and name allotted to political parties which are using religion or carrying religious connotations in their symbols.

"The people must vote on the basis of anything except religion. If a candidate is elected on the basis of religious symbol/ name, then the whole purpose of enacting sub-clause (3) of Section 123 of RPA would cease to exist," said the plea.

Citing apex court's judgments, the plea said the top court has given utmost importance to secularism and its impact on the social fabric of the nation.

"Therefore, by allowing the usage of religious symbols/ names by the political parties, the Election Commission of India is defying the mandate of the Constitution," added the plea.