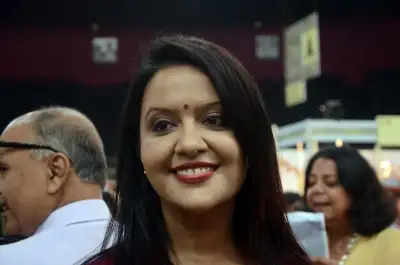 She said that Koshyari is a 'Marathi manoos' (Marathi man) at heart whose recent utterances on Chhatrapati Shivaji Maharaj were misinterpreted.

Amruta said she knows the Governor personally and he genuinely loves the Marathis in the state.

"I have experienced this myself... Though it has happened many a times that he has said something that has been wrongly interpreted" claimed Amruta, speaking to the media.

Her defence of Koshyari - who kicked up a huge row on November 19 with his statements on Chhatrapati Shivaji Maharaj - came a day after the Maha Vikas Aghadi alliance declared that the Governor has "crossed all limits".

Sena (UBT) President and ex-CM Uddhav Thackeray said that the Governor has insulted Maharashtra's ideals and icons like Chhatrapati Shivaji Maharaj, Mahatma Jyotirao Phule and Saviti Phule and also the people of the state.

"After the 'Minde' government (referring to Shinde) came to power in the state, it is being continuously insulted and abused, the Governor is slighting 'Shivraya'. The Centre should recall him immediately. People who have no place even in old-age homes are being appointed as Governors," said Thackeray sharply.

NCP President Sharad Pawar said on Thursday that Koshyari has "now crossed all limits" and urged the President Draupadi Murmu and Prime Minister Narendra Modi to take a call on him.

"The post of Governor represents an institution... To maintain its dignity, we did not speak against the Governor earlier, but now he has crossed all limits. Such people don't deserve crucial posts like Governor" said Pawar sternly.

The state Congress President Nana Patole and other party leaders have also demanded the removal of the Governor for his slur against Chhatrapati Shivaji Maharaj.

The direct descendants of the legendary Maratha warrior king, Chhatrapati Udayanraje Bhosale and Chhatrapati Sambhajiraje have come down heavily on the Governor for his statements on their illustrious ancestor.

Bhosale called Koshyari 'third-class' and has shot off letters to the President, PM and Union Home Minister Amit Shah demanding his removal while warning that he would launch an agitation in the state.

However, the Governor sought to make amends by praising Chhatrapati Shivaji Maharaj at a function a couple of days ago, but the state leaders are not convinced and are firm on his ouster.