26 years on, victims' families still knocking in vain on doors of justice

New Delhi, Jan 22 (IANS) The legal route taken by Neelam and Shekhar Krishnamoorthy and the families of the other Uphaar cinema fire tragedy victims is full of twists and turns. It has been 26 years and the search for justice still continues. 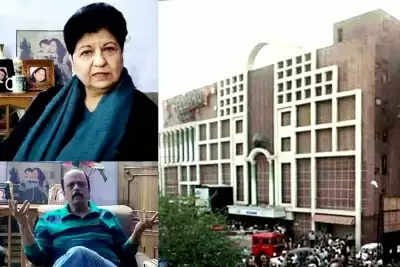 <br>The Krishnamoorthys' home is quiet with the photo frames of their two children, who perished in the fire, hanging on the wall. Unnati and Ujjwal seem to be looking for justice. It is their parents' hard work and courage that has kept them going to seek what they want from India's judicial system. They are determined to fight on until their last breath.

Neither they nor their kids knew that a movie on a Friday evening will turn Neelam and Shekhar's lives upside down. In a span of a few hours, a family of a cheerful four was reduced to two members.

Twenty six years ago a fire broke out in Green Park's Uphaar ninema at New Delhi while the film "Border" was being screened.

In June 1983, the Deputy Commissioner of Police, Licensing, had suspended the cinema's license for four days due to structural and fire safety deviations.

On account of the stay order, only temporary permits were issued to the cinema and the theatre owners -- Sushil and Gopal Ansal -- kept on obtaining temporary permits from the Licensing Authority for periods of two months each, for 14 years till June 13, 1997, the day the fire broke in Uphaar.

At 4.55 p.m., a swirling mass of thick smoke engulfed the balcony section of the hall. In the absence of fire exits and ushers to help the patrons, the people seated on the balcony found themselves trapped. By 7 p.m., 59 people from 28 families had died. This included Unnati (17) and Ujjwal (13).

For the victims' families, who were devastated at losing their loved ones, the Krishnamoorthys formed AVUT (Association of the Victims of Uphaar Tragedy) on June 30, 1997, barely 17 days after the tragedy struck. Starting off as a nine-family association, it is a 28-family powerful registered society now.

The investigation into the fire incident which began with the Delhi Police's crime branch conducting the probe, on July 24, 1997, was transferred to the Central Bureau of Investigation (CBI).

On November 15, the CBI filed a chargesheet against 16 accused persons including appellants Sushil Ansal, Gopal Ansal and HS Panwar.

In an order dated July 31, 2000, that is three years later, the Delhi High Court directed the trial court to frame charges by October 16, in the petition filed by AVUT for the main case.

The court framed charges against all the 16 accused under various Sections of the Indian Penal Code (IPC), including 304 (culpable homicide), 304 A (causing death by negligent act) and 337 (hurt), on February 27, 2001.

"The trial court shall also take expeditious steps to complete the trial as far as practicable by 15th of December 2002," the court said, adding that the "trial court shall hold trial of sessions case for 10 days in a month from May except June 2002".

On 27 January, 2003, the Ansals' plea seeking re-possession of the theatre was rejected on the ground that the place of incident is to be preserved to appreciate evidence.

From September 4, 2004 to August 20, 2007, the court recorded the statements of the accused, recorded testimonies of defence witnesses, the Additional Sessions Judge (ASJ) Mamta Sehgal inspected the theatre, the accused started advancing final arguments and senior advocate Harish Salve appeared for the CBI to advance final arguments.

The AVUT on May 18, 2007, approached the High Court seeking conclusion of the trial within a time frame.

On the date of verdict, the court convicted all the 12 accused, including Sushil and Gopal Ansal, in the main case and sentenced them to two years imprisonment. By that time, four accused had died.

One and a half months later, the High Court granted bail to the Ansal brothers and two other accused.

However, in the same year on September 11, the Ansals were sent to Tihar Jail after the Supreme Court (SC) cancelled their bail.

On December 19, 2008, the High Court upheld the trial court's order convicting the Ansal brothers but reduced their sentence from two years to one year.

In 2009, the SC issued notice on a petition filed by AVUT for enhancement of the sentence and alteration of charges. The CBI too filed an appeal seeking enhancement.

Later in April, 2013, the SC reserved its order on the appeals of the Ansals, the CBI and AVUT.

In a twist, on March 5, 2014, the judges differed on the sentence. One judge awarded one year, another sentenced the Ansals to the term already undergone. The matter was referred to a three-judge bench.

A year and four months later, in August 2015, the SC allowed the Ansals to walk free after paying a fine of Rs 30 crore each (Rs 60 crore in total).

The amount by way of a demand draft was to be paid to the Chief Secretary of the Delhi Government for setting up a new trauma centre, which is now called AIIMS Jai Prakash Narayan Apex Trauma Centre.

Moreover, HS Panwar was awarded a two year sentence subject to the condition that if he pays Rs 10 lakh for the Trauma Centre, then the sentence will stand reduced to the period already undergone.

In 2017, in the review petition filed by AVUT and the CBI, the SC asked Gopal to undergo the remaining one-year jail term while his elder brother Sushil was given relief from incarceration, in view of age-related complications keeping in mind the prison term already served by him. However, the fine of Rs 30 crore each for the Trauma Centre was maintained as directed by the SC in its judgement dated August 19, 2015.

On February 20, 2020, the SC dismissed a curative petition filed by AVUT.

On November 8, 2021 , a Delhi court awarded seven-year jail terms to the Ansals in the tampering with evidence case and imposed a fine of Rs two crore twenty five lakhs on each. The rest were fined Rs 3 lakh each.

Last year on 18 July, Principal District and Sessions Judge, Patiala House courts, upheld the order of conviction under Sections 409, 201 and 120B of the IPC passed by the trial court against the Ansals, Dinesh Chandra Sharma (Ahlmad, who was charged with tampering of a document) and P. P. Batra except Anoop Singh as he was acquitted of all charges.

On July 19, 2022, the Patiala House courts passed the order on sentence and reduced the sentence of seven years to the period already undergone i.e eight months and 12 days.

"We empathise with you (AVUT). Many lives were lost, which can never be compensated. But you must understand that penal policy is not about retribution. We have to consider their (Ansals) age. You have suffered, but they have also suffered," the judge said.

AVUT moved the High Court seeking enhancement of the sentence in the tampering with evidence case.

The plea said that the district judge has failed to consider that the offence of tampering is extremely serious in nature as it affects the entire criminal justice system.

The plea stated that the sessions court failed to consider that this is a case which shatters the confidence of the public at large in the criminal justice system and it requires a maximum sentence so that it works as a deterrent for others who even dream of tampering with the court record in future.

The Ansal brothers misused the liberty granted to them in the main case and tampered with the evidence after hatching criminal conspiracy with the court staff," stated the plea.