Have Katrina Kaif and Vicky Kaushal got engaged? Actor's father told the truth 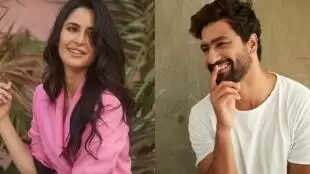 entertainment jaipur desk !!!Bollywood's famous actress Katrina Kaif and Vicky Kaushal have been in discussion for a long time about their affair. Although it has not been officially said from both of them that they are together. Apart from the relationship, now the news of their engagement is also becoming increasingly viral. There was speculation about both that they had secretly engaged. However, now Vicky Kaushal's father Sham Kaushal himself has completely dismissed these speculations. According to a source close to Film Beat, Vicky Kaushal's father Sham Kaushal cleared the rumors of Katrina Kaif and the actor's engagement and said, "These things are not true at all." Talking about this, the actor's team said that he is not in Mumbai these days and is shooting for 'Mr Lele' while staying in Puducherry.