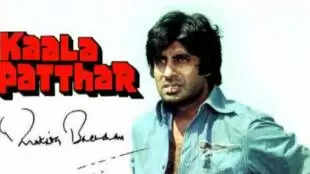 entertainment jaipur desk !!!BAmitabh Bachchan's film 'Color Patthar', which released on 24 August 1979, has completed 42 years today. On the completion of 42 years of the film, Amitabh Bachchan has shared some pictures of the film on his social media and revealed that he used to work in the coal mines of Dhanbad before the films. The film was directed and produced by Yash Chopra, based on the 1975 accident in Dhanbad's Chasnala coal mines.