United Nations, Jan 26 (IANS) UN General Assembly President Csaba Korosi will begin a three-day visit to India on Sunday that will uniquely focus on the connection between science and the work of the Assembly besides the usual meetings with officials, according to his spokesperson Paulina Kubiak. 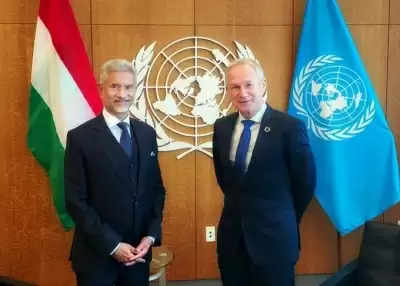 <br>"A main focus of the visit is on making connections between the General Assembly and science, particularly on the issue of water, ahead of the UN Water Conference in March," Kubiak said on Wednesday.

In New Delhi, he will discuss India's water conservation projects with senior officials and experts at the NITI Aayog and visit Bengaluru, the nation's centre of science, for meetings with scientists at the Indian Institute of Science and visit a water project, she said.

Korosi is scheduled to meet External Affairs Minister S. Jaishankar to continue discussions on topics raised during their last meeting in December including the Assembly's priorities and India's engagement with it, Kubiak said.

These priorities are also expected to be on the agenda during his visit to the G20 Secretariat for a meeting with a delegation led by Amitabh Kant, the G20 Sherpa, she said.

India currently holds the presidency of the G20, the group of major industrialised and emerging economies.

Korosi's visit coincides with the anniversary of the assassination of Mahatma Gandhi on January 31 and he will lay a wreath at the Raj Ghat, Kubiak said.

The UN Water Conference is to assess the progress on water-related goals of the UN's sustainable development goals and chart their future.

Korosi has a special interest in development, a key element of his agenda as Head of the General Assembly, and particularly in the water conservation element of it.

Before his election as UN General Assembly President, he was the Environmental Sustainability Director in the Hungarian President's Office and the President's point person at the High-Level Panel on Water co-convened by the UN Secretary-General and the President of the World Bank Group in 2016.

(Arul Louis can be contacted at arul.l@ians.in and followed at @arulouis)