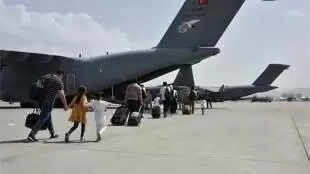 jaipur desk !!!Afghanistan has been in turmoil since the Taliban regime came to power. Thousands of people are fleeing the country. People are gathering in large numbers at Kabul Airport. The Taliban captured Afghanistan within the past few weeks and took control of the capital, Kabul, on 14 August. Meanwhile, thousands of people have gathered at the airport and are trying to get out of the country. On Thursday evening, a statement came from the US Department of Defense Pentagon that Kabul Airport is still safe and planes are taking off from there. Major General William Hank Taylor said on behalf of the Pentagon that there are still more than 5,200 US troops in Kabul and they have kept the compound under their control.