Posters of 'Free Vaccine' with PM's photo put up in Delhi, AAP said - got your posters installed for "free 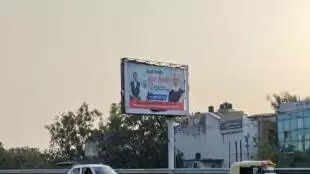 The Delhi government and the Center have remained firm regarding the arrangements and vaccine regarding Corona. First, the allegations started against each other regarding oxygen, which is still going on. Meanwhile, verbal war is being seen among themselves regarding the vaccine. In fact, hoardings have been put up in Delhi, in which free vaccine has been written along with the picture of the Prime Minister. Aam Aadmi Party tweeted a picture and took a jibe at the Modi government. It was written in the tweet, 'Modi ji, you did not give free vaccine, but got your posters installed for free!? Show the bill for this hoarding. After this tweet of AAP, people started reacting in different ways on social media. A user named VijayBRai wrote in response, 'I am