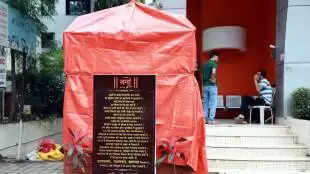 Ijaipur desk !!!n Pune, Maharashtra, a BJP worker built a temple of Prime Minister Modi worth lakhs of rupees and a statue of PM Modi was also placed in it. But after facing many objections, his idol was also removed from the temple of PM Modi built in Pune and the temple was also covered with tarpaulin. According to the information received, BJP worker Mayur Munde, a resident of Pune, Maharashtra, had built a temple of PM Modi at a cost of about 1.6 lakh rupees. The famous red marble of Jaipur was also installed in it. Along with this, a poem dedicated to Prime Minister Modi was also written in the temple.