Ranchi, Jan 23 (IANS) The Enforcement Directorate has started questioning the Deputy Commissioner of Sahibganj district, Ramniwas Yadav in connection with money laundering to the tune of Rs 1,000 crore through illegal stone mining. 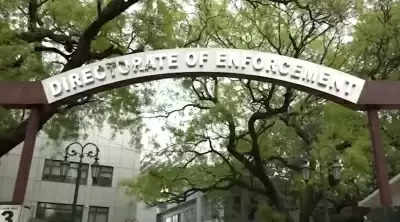 Ranchi, Jan 23 (IANS) The Enforcement Directorate has started questioning the Deputy Commissioner of Sahibganj district, Ramniwas Yadav in connection with money laundering to the tune of Rs 1,000 crore through illegal stone mining.

Yadav reached the ED's zonal office at Airport Road in Ranchi at around 11.30 a.m.

Yadav is the second IAS officer who is being questioned by the ED in the Jharkhand mining scam.

In this case, the ED had filed a chargesheet against IAS officer Pooja Singhal after questioning her, which stated that illegal stone mining took place on a large scale in Sahibganj during the tenure of present Deputy Commissioner Yadav.

According to the Jharkhand Minor Minerals Avoidance Rules 2004 and Jharkhand Minerals (Prevention of Illegal Mining, Transportation and Storage) Rules 2017, the overall responsibility for the management of minerals rests with the Deputy Commissioner.

On November 18 last year, Chief Minister Hemant Soren, while being interrogated by the ED, said that he never stopped any DC-SP from curbing illegal mining.

The ED has evidence that Pankaj Mishra, the kingpin of the mining scam, spoke to Yadav and Superintendent of Police Anuranjan Kispotta frequently on phone, while being in judicial custody on aspects related to contract-lease, tender and transfer-posting.

The ED has also extracted CDRs of the numbers from which he used to call these officers.

According to sources, the ED has information of Mishra being in contact with a total of 11 IAS-IPS officers. Preparations to send summons to some of these officers are underway.

It is being said that the ED will also question Yadav regarding the case where a ship laden with trucks illegally carrying stone chips overturned in the Ganga river in Sahibganj in March, 2022.

In the matter, Yadav had submitted the report to the then Dumka commissioner Chandramohan Kashyap, who then sought another report after sighting many flaws in the one received.

According to the ED, Mishra had then pressurised Kashyap to accept the report.