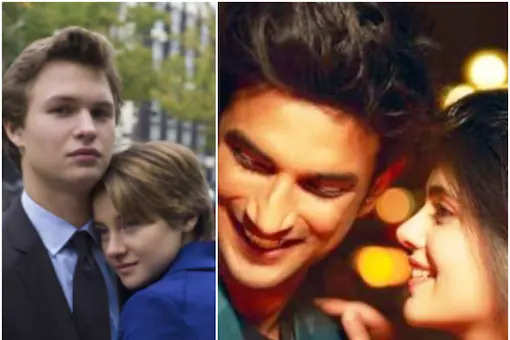 Movie remakes are the flavour of the season, and they have been for quite some time now. Filmmakers pick tried-and-tested storylines and formulaic hits and rights are bought. Almost always recast, sometimes updated for contemporary viewers and at other times moulded to suit the local audiences’ taste, remakes continue to be churned out year after year.

In this weekly column, Reel Retake, we compare the original film and its remake. Beyond highlighting the similarities, differences and measuring them on the success scale, we aim to discover the potential in the storyline that spurred the thought for a newer version and the ways in which a remake could possibly offer a different viewing experience. And if that is the case, analyse the film.

The movie in focus this week is tragi-comedy The Fault In Our Stars and the Hindi remake of it- Dil Bechara.

Based on an eponymous novel by John Green, The Fault In Our Stars follows its terminally ill teenage protagonists Hazel Grace (Shailene Woodley) and Augustus ‘Gus’ Waters (Ansel Elgort). They meet during a support group, become friends and treasure life’s precious moments with each other in a journey that can only end in heartbreak.

Hazel is hesitant to be part of a support group at first and Gus is just accompanying his friend to that place, so the meeting is a stroke of fate. Gus is a very straightforward man and the way he exchanges silent glances with Hazel is endearing to her. Their chemistry is instant but Hazel seems wary in opening up to him just yet. The two start bonding over common hobbies and agree to read each other’s favorite books. Gus gives Hazel Counter Insurgence and Hazel recommends An Imperial Affliction, a novel about a cancer-stricken girl named Anna that parallels her own experience, but has an abrupt ending. Its author, Peter Van Houten (Willem Dafoe), retreated to Amsterdam following the novel’s publication and has not been heard from since. Hazel is obsessing over what happened to Anna and makes it evident to Gus.

Weeks later, Gus tells Hazel that he has corresponded with Van Houten via email and he is only willing to answer their questions in person. Gus then surprises Hazel with tickets to Amsterdam, acquired from the Make-A-Wish Foundation. Hazel has a medical setback but is eventually allowed the trip halfway to the other part of the world. Hazel, her mother and Gus set off to Amsterdam.

They spend some lovely moments together before Gus confesses his love for her during a romantic meal sponsored by Van Houten. The following afternoon, they meet Houten and are surprised to find out he is mean and an alcoholic. It is revealed that the emails from Van Houten had actually come from Lidewij (her manager), who arranged the meeting without Van Houten’s knowledge.

During their meeting, Van Houten taunts Hazel for seeking answers to a piece of fiction and belittles her medical condition. Hazel and Gus leave, utterly distraught. Lidewij invites them to go sightseeing to make up for their ruined experience and they visit the Anne Frank House, where they share their first kiss. The next day, Gus tells Hazel that his cancer has returned, spread throughout his body, and is now terminal. Hazel is heartbroken, but hopeful.

After their return, Gus’ health continues to deteriorate. Gus invites Hazel and his best friend Isaac to his pre-funeral, where they deliver eulogies. Hazel tells him she would not trade their short time together for anything. Gus dies eight days later. Van Houten attends his funeral, revealing that Gus had demanded he do so. Van Houten explains to Hazel that An Imperial Affliction is based on his own daughter, Anna, who died from leukemia at a young age. He gives Hazel a piece of paper, which she initially discards, but later retrieves after a conversation with Isaac reveals that the paper was a letter from Gus, not Van Houten. Gus had asked Van Houten for his help in writing a eulogy for Hazel.

Hazel reads the letter, in which Gus accepts his fate and professes his love for Hazel. It concludes with Hazel lying on her back in her lawn and looking up at the stars.

The Fault In Our Stars is a teen movie unlike most. The conversations between Gus and Hazel are endowed with wise maturity and thus, it not only appeals to teens but people across age groups. Gus is a charismatic, snappy and extroverted man who always wears a smile on his face. He has accepted the inevitable, that he is going to die sooner or later, and it has imparted him a sense of peace and settlement. Rest of his days will only be spent living and not worrying. He is as he appears and that’s the best quality about him.

Hazel is sarcastic, witty and introverted. She finds her match in Gus and we see it during their first encounter at the support group. While she is hopeful of their relationship and this new turn life has taken, she does the balancing act and does not let their emotions get the better of her. The conflicted feelings about falling in love while living with a terminal disease are believable. The dialogic portions between Hazel and Gus are natural as they accept living on borrowed time but are still brimming with sarcasm and wit. They are emotional as much as witty. In tear-jerking moments, Gus’ smile will leave you overwhelmed. Hazel’s pragmatic nature, meanwhile, keeps the pathos in check. This is a human drama of the highest order, and there is a whole lot to love and emotion about the movie with a profound sense of meaning about life and death. Shailene Woodley and Ansel Elgort’s acting lifts this movie singlehandedly, which otherwise does not have a strong screenplay to work around with.

Gus’ free-spirited nature is well complemented with Hazel’s vulnerability. They come close, but not too close, thus giving their relationship a forever longing of sorts that aches but also leaves with a sweet aftertaste. The movie is not imparted with a distinct style but director Josh Boone trusts his actors to carry the dramatic weight inherent in the story.

Gus finds his Bollywood counterpart in Manny, played by Sushant Singh Rajput, who inherently has the charm required to pull off this role. But for some reason, in scenes with wit, the natural flair of the original Gus is missing in Sushant’s performance. This crisis also arises from the fact that the dialogues are not given the required weight. A lot of realism is lost in translation and adapting it for Indian taste with modifications. Manny and Kizzie (Sanjana Sanghi) seem to be in the same scenes as The Fault In Our Stars but the soul is entirely missing. Sanjana’s performance works on the surface level and lacks depth. Her role in runtime and presence does not match Shailene’s in the original. The film then relies totally on Sushant to work it around in dramatic moments. Manny, as compared to Gus, is also lightweight. Manny has both his legs fine. He dances well and walks perfectly. All of a sudden, in the cancer support group, he shows his one lost leg. Then he walks with struggle.

In The Fault In Our Stars, Hazel is obsessed with a novel titled An Imperial Affliction and wants to meet the author. The novel somewhat reflects her life and drives her motive to meet Van Houten. In Dil Bechara, Kizzie is obsessed with a music album and wants to meet composer-singer Abhimanyu Veer (Saif Ali Khan). One of the songs from his album is incomplete and Kizzie wants to meet him to ask why he left it incomplete. There is no rationale behind this rather than a simple desire to meet your favourite artist. These modifications don’t let you invest in the story as much.

Dil Bechara’s direction lacks focus and the film feels rushed to the conclusion, leaving out the protagonists’ moments that add value. One of the best parts of the story is the silences and the pain of the people who see death at the doorstep and how those around them are affected. But that emotion is no where to be seen in the remake. The Van Houten scene recreation isn’t up to the mark either.

The Fault In Our Stars has been much loved by the fans of cinema. Dil Bechara had many expectations riding on it simply for the fact that it was Sushant’s posthumous film. For his fans, this will be a film to remember him by but undeserving of the huge talent that he possessed. Dil Bechara has been well received on OTT where it saw release in 2020 but simply in terms of remake, it is a bad one, mostly because the direction and screenplay lacks the depth story like this deserves to have.