Leopard ambushed and attacked a herd of langurs, see what happened next in the video 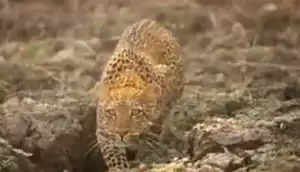 ajab gajab jaipur desk !!!Leopards are adept at ambushing their prey. Rarely does it happen that a leopard attacks an animal and it cannot hunt it. The leopard, which specializes in fast speed and hunting, completes its hunting work in a few minutes. We got to see one such video on social media. In which a leopard ambushed and attacked a herd of langurs. What happened after that you can see for yourself in this video. This video has been shared from Twitter account @iftirass. Which has got more than seven and a half hundred and fifty views so far.