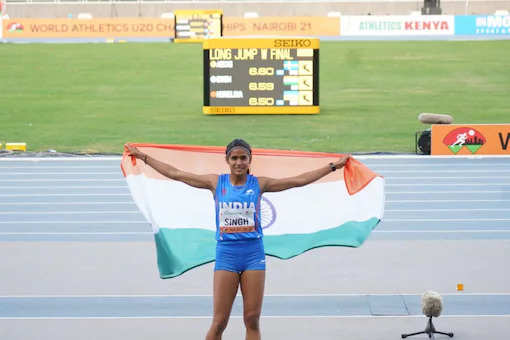 Neeraj Chopra, India’s sole athletics gold medallist at the Olympics, had words of praise for Shaili Singh on Sunday after the 17-year-old won the silver medal in long jump at the U20 World Athletics Championships. Shaili registered a personal best of 6.59m to finish in the second position and missed the gold by just a centimetre. Neeraj congratulated Shaili for her effort and also Anju Bobby George for her mentorship to India, which yielded the result.

“Many congratulations, Shaili! You came so close to Gold today, and I’m sure you have a long way to go. Congratulations to @anjubobbygeorg1 ma’am for your mentorship and guidance to Shaili," Neeraj tweeted.

A protege of legendary long jumper Anju Bobby George, Shaili was leading at the end of the third round but the 18-year-old Swede overtook her in the fourth round by a mere 1cm which proved to be decisive in the end. Mariia Horielova of Ukraine took the bronze with a best jump of 6.50m.

“I could have jumped farther than the 6.59m and won the gold. My mother had told me about winning gold and national anthem being sung in the stadium (but I could not do it)," an emotional Shaili said after the race. “I am just 17, I want a gold in next U20 World Championships (in Cali, Colombia). There is also Asian Games and Commonwealth Games next year and I want to do well in those events." Her coach Booby George said she had a bit off a technical issue while “landing", otherwise she would have won the gold.

“She was weeping (after the event), she knew she could have won the gold. There was a bit of a technical issue while landing, otherwise she could have cleared 6.65m or even 6.70m," said George. “It is the first time she is not winning a gold in any competition. She (Shaili) hates silver and she is the big thing after Neeraj Chopra." India ended their campaign with a best ever medal haul of 2 silver and 1 bronze, though the country had won one gold each in the earlier two editions — by Olympic champion javelin thrower Neeraj Chopra (2016) and quartermiler Hima Das (2018).

The mixed 4x400m relay quartet and 10,000m race walker Amit Khatri had earlier won a bronze and a silver respectively in this championships. Shaili began brightly with a 6.34m and repeated the same distance next before her best effort in the third round. Her next two attempts were fouls and she could not get past the 6.60m in her final jump and the youngster seemed to be distraught at missing a gold and chance to create history. Shaili, considered one of the brightest upcoming stars in Indian athletics, had topped the qualification round on Friday with a best jump of 6.40m.

The Jhansi-born athlete, who was raised by a single mother who worked as a tailor, currently trains at the academy of Anju Bobby George in Bengaluru. She is coached by Anju’s husband Bobby George. She had won the women’s long jump event at the National (Senior) Inter-State Championships in June with an effort of 6.48m, her previous personal best. She is the current U-18 world No. 2 and U-20 national record holder. In men’s triple jump, Donald Makimairaj missed the bronze by 3cm as he produced his personal best of 15.82m but had to be content with a fourth-place finish.

Gabriel Wallmark of Sweden won the gold with a best jump of 16.43m while Jaydon Hibbert (16.05m) of Jamaica and Simon Gore (15.85m) of France took the silver and bronze respectively.