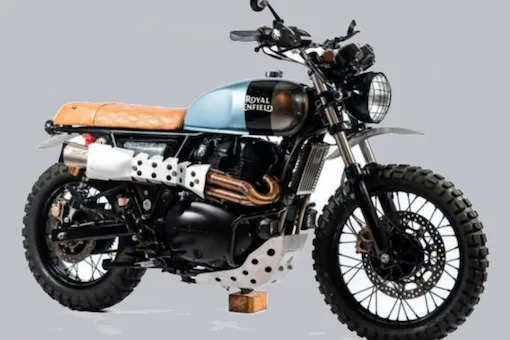 Royal Enfield motorcycles’ popularity and fan following are not just limited to the Indian market. The fusion of the classic retro touches with modern engineering and features makes it a super hit in the global market too. While the original designs are a key reason why people prefer RE bikes over other, many independent modifiers and designers present the bikes with their personalized touches and modification. The latest addition to this endless list of modified RE bikes is the Royal Enfield Interceptor 650 Scrambler that has been built by Argentina based custom house STG Tracker.

Inspired by the Triumph Scrambler, STG Tracker has revamped the Royal Enfield Interceptor 650. Apart from the basics like the engine, fuel tank and chassis, the modifiers have changed everything on the bike. From the bigger tires to the new tan seat cover, everything on this Scrambler looks refreshingly new.

The front of the bike gets a headlight protector grille, custom raised fender, and a new bash plate protector for the engine. The handlebars have a stylish protector. This modified Interceptor sits a bit taller than the original bike because of its new raised suspension and knobby tires. The new tire setup adds a bulkier feel to the bike The stock dual piped exhausts have been replaced with a custom side-mounted system. On the rear left side, there’s space for keeping extra fuel in a gallon.

The engine capacity remains the same 648cc air/oil-cooled parallel twin motors that can produce up to 48PS of power couples with 52 Nm of peak torque. The engine has been paired with a 6-speed gearbox with a stock slipper clutch.

For the Indian market, the Royal Enfield Interceptor 650 has been priced between Rs 2.91 to Rs 3.13 (Ex-showroom)